Marigold Infrastructure Partners started construction for Valley Line West in 2021. It will take 5 to 6 years to complete.

It’s the second stage of the Valley Line, an urban-style 27 km line that will operate between Mill Woods in southeast Edmonton and Lewis Farms in west Edmonton.

Learn more about the history of public engagement or the project. 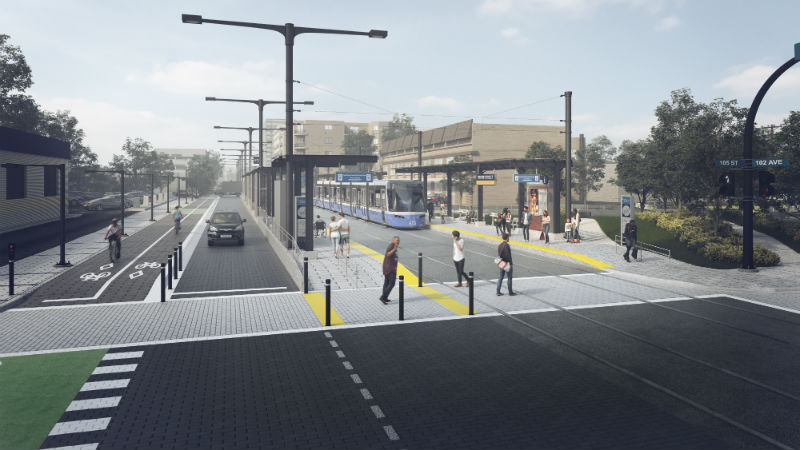 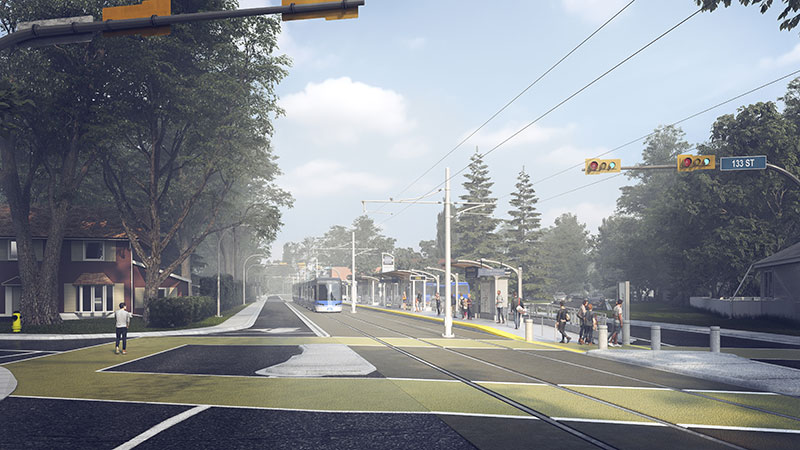 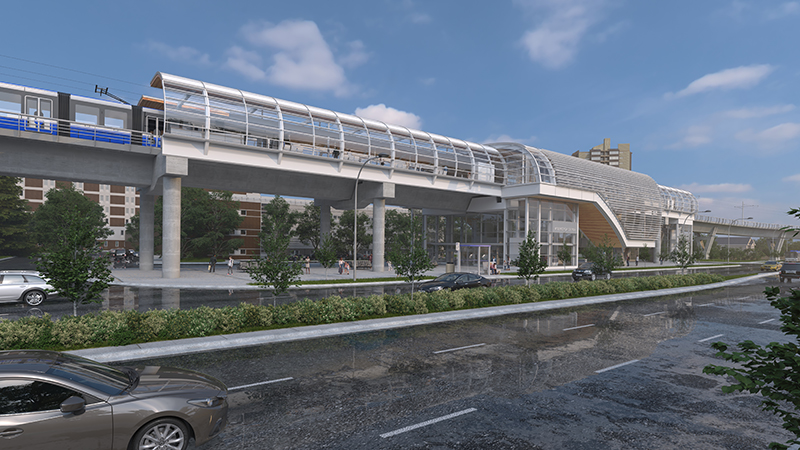 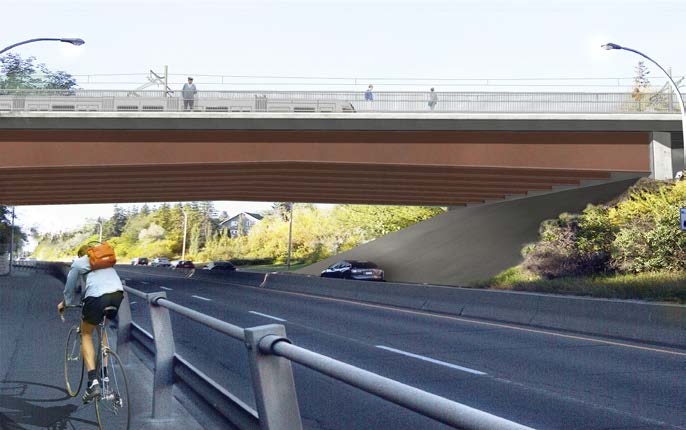 Demolition of the existing Stony Plain Road Bridge is scheduled to begin at the end of 2022. Construction of the new bridge will take up to two years. The new bridge will be wider to accommodate one lane of vehicle traffic in either direction, the Valley Line West LRT, a sidewalk and a shared-use path on the south side of the bridge. Once completed, the mixed-use transportation corridor will improve access to and from the west end to downtown.

See the Stony Plain Road Bridge Construction Notice for more information on the scope of work. You can also sign up for regular project updates.

EPCOR crews are completing a number of utility relocation projects along the Valley Line West LRT route. Learn more about these projects by visiting EPCOR.

Crews will continue to remove vacant buildings on City-owned properties along the Valley Line West route to make way for future construction and LRT infrastructure. Properties will be contained with fencing and crews will use excavators and other machinery along with large bins to remove debris and materials as work progresses.

This location ensures that transit riders continue to receive transit service to and from the surrounding communities and West Edmonton Mall. All bus routes accessing the previous transit centre have moved to the temporary transit centre.

Construction for the temporary transit centre began in May and was completed in summer of 2021.

Starting on or around October 3, tree removals will begin along the Valley Line West alignment in preparation for construction. Marigold Infrastructure construction crews will be working along Stony Plain Road/104 Avenue between 139 Street and 121 Street. Work will also occur on Groat Road near the Stony Plain Road bridge.

For questions related to the Valley Line West project, please contact LRTprojects@edmonton.ca or 780-496-4874.

As part of an ongoing commitment to transparency and accountability, the City releases periodic reports to provide an overview of progress and performance on the Valley Line Project. These reports include a summary of work completed by MIP and the City.

The project entered into procurement on January 7, 2020. The Request for Qualifications (RFQ) closed on February 24, 2020. On March 13, 2020 the City shortlisted 3 teams to participate in the Request for Proposal (RFP) phase of procurement. On December 23, 2020, the City reached financial close with Marigold Infrastructure Partners who was selected as the preferred proponent to design, build and partially finance the $2.6 billion Valley Line West LRT.

The City has selected Hyundai Rotem Company as the successful supplier that will provide 46 light-rail vehicles (LRVs) for the Valley Line West project.

Read our news release and our industry bulletin for more information about the award of the LRV contract to Hyundai Rotem Company. We’ve compiled a fairness report that outlines our approach for ensuring the procurement process for LRVs is transparent, fair and equitable.

The request for qualifications (RFQ) closed on February 4, 2021. On March 4, 2021, the City shortlisted 3 teams to participate in the Request for Proposal (RFP) phase of LRV procurement. Please read our industry bulletin for more details. 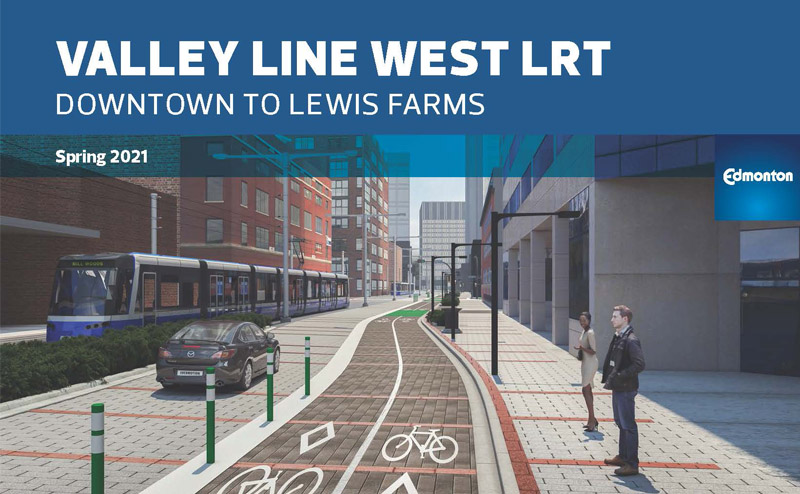 Note: All images and renderings remain subject to change and are not final. Final designs will be shared publicly when complete. 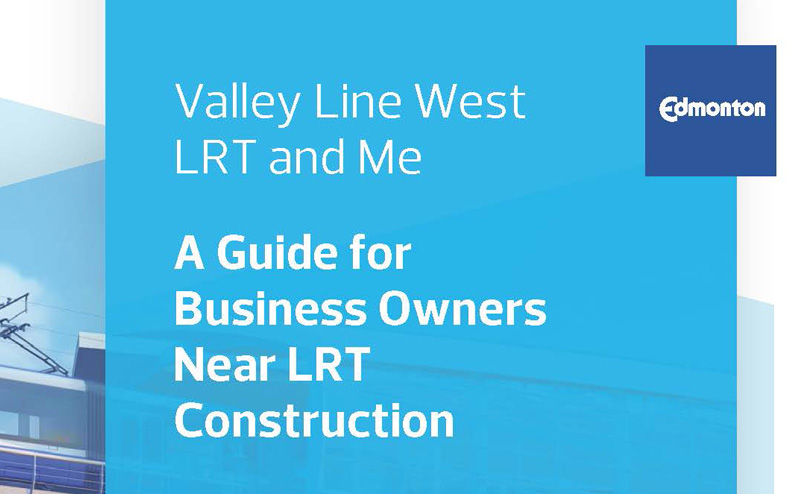 View our 360-degree virtual reality video of the Alex Decoteau stop on the Valley Line West route. See first-hand how the Valley Line LRT will transform communities into more walkable, street-oriented places for people to live, work and play.

When does construction start?

Construction began in 2021 and will take 5 to 6 years to complete. See current construction notices on the Marigold Infrastructure Partners website.

The City is responsible for delivering the project. The project is funded by all 3 levels of government, with the Government of Canada and the Government of Alberta each providing approximately 40% of the funding, and the City of Edmonton funding the remaining 20%.

Marigold Infrastructure Partners has been selected to design, build and partially finance the Valley Line West. Marigold is responsible for communicating the day-to-day construction impacts to business owners. We have recently selected Hyundai Rotem Company as the successful supplier that will provide 40 light-rail vehicles (LRVs) for this project. Other contractors will be selected as needed, to supply operations and maintenance services, and other supporting construction activities.

What is Sustainable Urban Integration (SUI)?

With direction from the City and 2 years of public consultation, the principle of Sustainable Urban Integration (SUI) was established.

These principles were incorporated into the Valley Line LRT - Stage 1 Project Agreement.

What is Property​ ​Acquisition and Expropriation?

Why is the LRT designed to run primarily at street level, and how is it made compatible with car traffic?

The Valley Line LRT is designed to meet the overall goals of LRT expansion while fully integrating with the communities it serves. The low-floor, urban style LRT allows stops to be small, basically a raised curb and sidewalk with a shelter. Stops can be spaced closer together, making LRT accessible to more people. It costs less than elevated or subway systems.

The Valley Line LRT will run alongside traffic in designated lanes and follow the posted speed limits. The LRT will cross through an intersection during a green light and stop at a red light, just like the other vehicles on the road. The LRT may get green light priority at some intersections, but because no crossing arms will be lowered, cross-traffic won’t have to wait additional time before and after the LRT passes. As a result, increases in wait times are usually minor.

Another benefit of keeping the LRT at street level is that no overhead structures or tunnels are required. Going above or below street level creates visual and physical barriers in the community that reduce comfort and accessibility for pedestrians and cyclists moving through or within the area.

When is above or below street level considered?

At other locations, street level crossings are incompatible with the style of road. For example, going above or below street level is required when an LRT crosses over Anthony Henday Drive or any of the streets in Edmonton’s “inner ring road”; Whitemud Drive, 75 Street, Yellowhead Trail and 170 Street.

Going above or below street level is also considered where traffic volume is already causing intersection gridlock and there is no other way to provide relief.

Why not elevate or tunnel the entire LRT?

A fully elevated or underground LRT would be inconsistent with the City’s vision, and it would be very costly. This higher cost would result in a much longer time to expand the system and realize the benefits.

What would going above or below street level involve?

Going above street level would require a bridge over the intersection for the LRT vehicles to travel on. The bridge is called an elevated guideway, and consists of a single deep beam that supports the weight of the bridge, LRT vehicles, snow, rain, wind, and so on.

The elevated guideway ramps up and down for about two blocks on each side of the intersection to get to its required height. It is typically supported on large concrete piers centered below the beam, but sometimes may need to be supported on a second layer of deep beams that span across the road onto concrete columns.

Due to the close proximity of the elevated station at West Edmonton Mall going underground is not considered feasible at 178 Street. Because an LRT stop can’t be placed on a slope, going above or below street level would usually mean that LRT stops intended to be placed near the intersection would need to be either shifted further from the intersection or built above street level as well.

Building above or below street level would be a departure from the City’s vision for a sustainable, urban, integrated, low-floor LRT system designed to blend into surrounding mature communities.

An elevated crossing would be more of a visual and potentially physical barrier. Building above or below street level would involve extending the tracks above ground from the elevated West Edmonton Mall station westward to cross over 178 Street and ramp down to ground level east of 182 Street. The 182 Street LRT stop is far enough away from 178 Street that it would probably be unaffected.

How are travel time savings calculated?

If plans for Valley Line involve LRT priority, is removing LRT priority an alternative to going above or below street level?

Plans call for partial priority for the LRT at some major intersections where the green signal can be extended slightly to allow the LRT to pass before it turns red.

However, the LRT may still get a red signal that will require it to stop. The assessment includes determining if a reasonable balance of intersection movements can be achieved.

Building a City Around LRT