Questions to be asked include:

Visit engaged.edmonton.ca/districtplanning to provide your feedback online or learn about engagement events in your district.

The Conversation Starter documents below are mini-information packages that introduce key District Planning topics and are intended to help Edmontonians prepare for upcoming engagements on district plans. They provide basic information on the project’s process and rationale and highlight how engagement will be incorporated into the district plans and District General Policy.

The videos are presentations of the Conversation Starters, intended to provide additional visuals and explanations.

Prototypes were shared with a group of core stakeholders to gather feedback and input on the structure, content and level of detail proposed to be contained within district plans. The input helped to improve the sample plans and that feedback was incorporated in the drafting of all remaining district plans.

The project team hosted 8 online Information Sessions to introduce District Planning to residents and community members. The sessions provided an opportunity to create awareness about the project and its connection to The City Plan’s implementation and to gather initial questions. 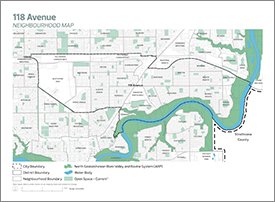 Scroll through District Maps with Neighbourhoods to find which district you live in.

Sign up for updates on the District Planning project.

Making the City Plan - What we Heard