Learn how to navigate 102 Avenue and 127 Street bike routes on a bike or in a vehicle.

102 Avenue is now one-way for vehicle traffic heading east from 121 Street to 111 Street.

Over 4.2 km of new protected bike lanes, shared roadways and paths have been installed in West Central Edmonton to support and inspire Edmontonians of all ages to try new ways to get around in their communities and in the city. The new bike routes can be found on 127 Street and on 102 Avenue.

4 Things to Know - In Your Car

1. Watch for no right on red signs 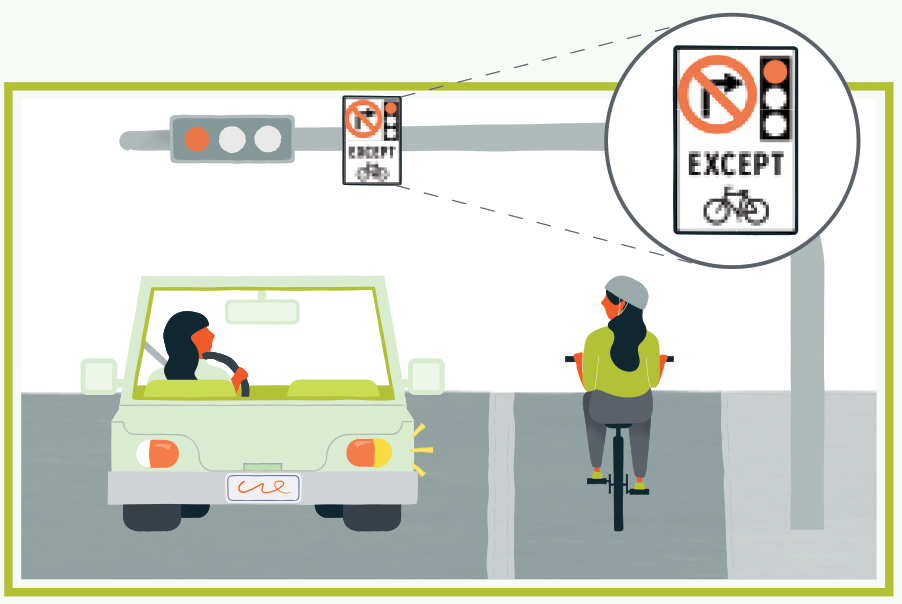 An important new sign on the bike lanes is the “No Right Turn on a Red.” 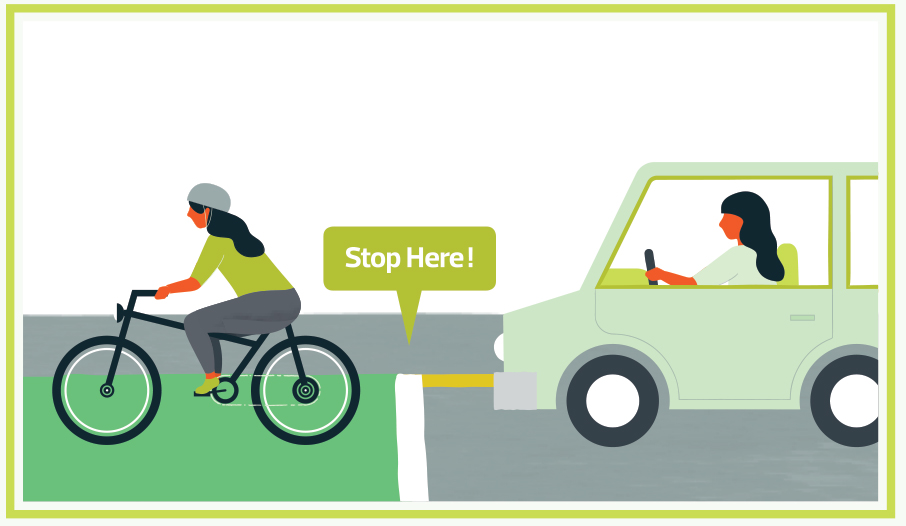 Green paint indicates points on the road where drivers and cyclists might cross paths.

3. Shoulder check and look both ways 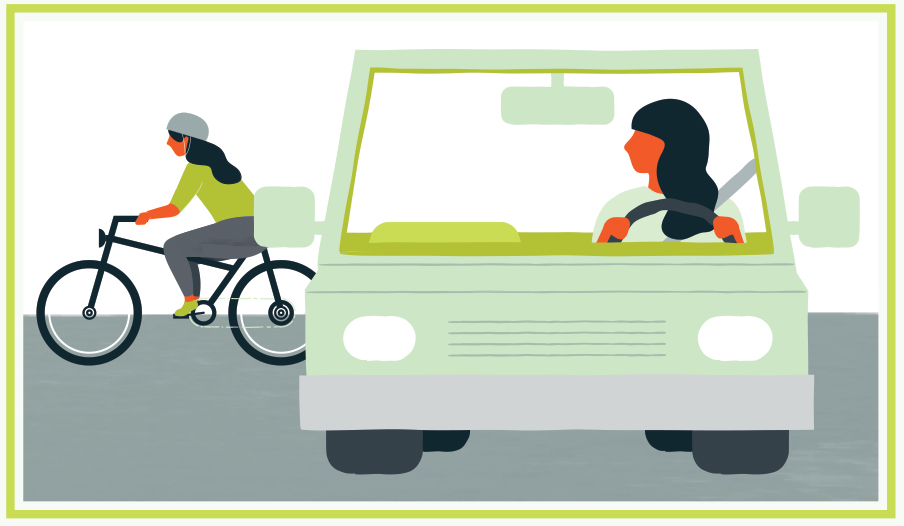 Cyclists will be traveling quickly and coming from both directions in the bike lanes.

4. Yield to cyclists when turning across the bike lanes 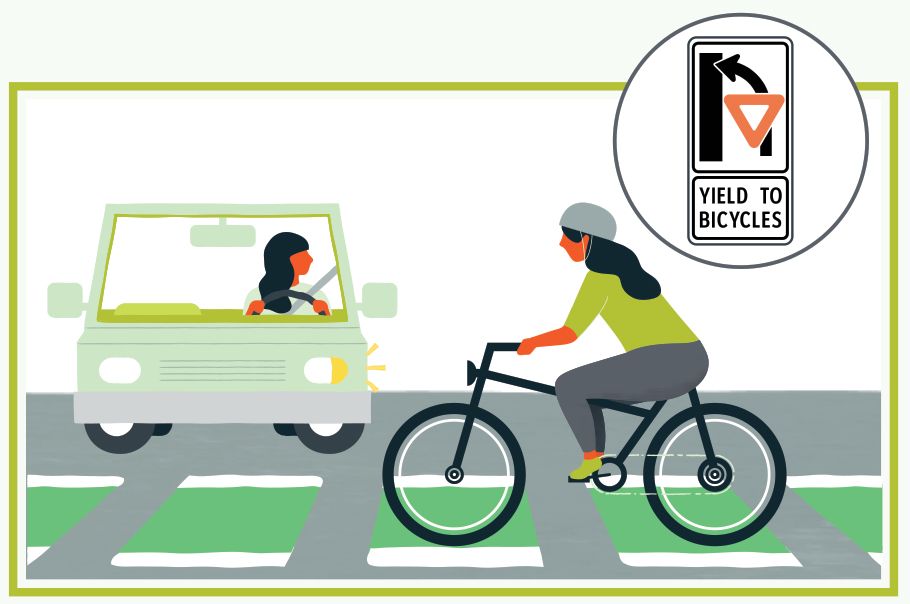 Green Stripes or White Dashed Paint indicates that a bike lane is crossing an intersection or accessway such as an alleyway or entrance into a parking lot.

Be Aware and Take Care

Green stripes and white dashed paint on the roadway mark areas where drivers and cyclists may cross paths. Watch out for each other.

Travelling slower along the Bike Routes will give you time to see and respond to all the new features.

There are a number of All-Way Stops along the 102 avenue bike route. Be aware, cyclists will also be riding in the bike lanes at these intersections.

On Your Bike and In Your Car

Green Bike Turn Boxes painted at intersections provide cyclists with a safe way to turn left or right. These boxes can be found in the bike lane or in a driving lane. ​

In Your Car or On Your Bike

Note: Crossing two lanes of traffic to make a left or right turn from a protected bike lane is not permitted.

On Your Bike, In Your Car and On Your Feet 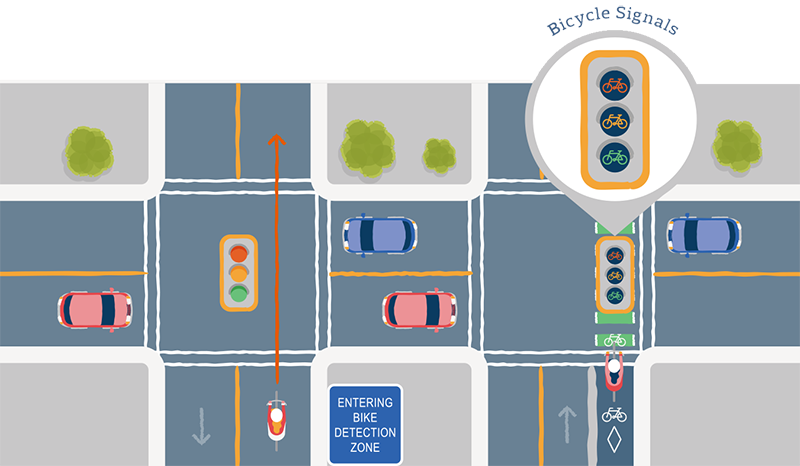 Green Stripes or White Dashed Paint at Crossings indicate that a bike lane is crossing an intersection or accessway, such as entrances into parking lots or alleys.

The paint markings at intersections and accessways will vary depending on the volume of traffic at these locations.

On-street Protected Bike Lanes are separated from moving and parked cars. These lanes will be either raised to the level of the sidewalk, or will have a physical barrier making driving and cycling more comfortable. Protected Bike Lanes may allow for travel in one or both directions.

A Raised Crossing brings the level of the roadway to that of the adjacent bus stop. Transit users will be getting on and off the bus at this location.

Shared pathways are for many activities - you can bike, walk, run, and more.

Some sidewalks may be designated as Shared pathways. Watch for signs.

At some intersections, there will be breaks in the protective barrier to allow cyclists to merge out of a bike lane and into the driving lane in order to make a right turn. Watch for signs.

Exiting the Bike Lane to Turn

Installation of the 127 Street bike route will continue north of 111 Avenue to 118 Avenue with the Inglewood neighbourhood renewal in 2018.

Helpful tips for all road users.