The ash borer or lilac borer (Podosesia syringae) is a day-flying clearwing moth native to North America. The larvae feed on the bark and wood of ash trees and lilacs.

Edmonton has a high density of ash trees and monitoring shows this insect to be widely distributed throughout the city. 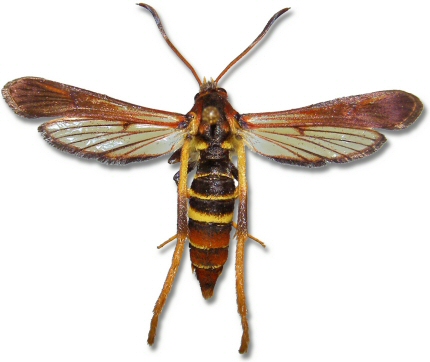 Tunnels made by the larvae provide access to moisture and fungi which can result in further tree decline. Extensive tunneling weakens stems and can increase breakage during storms.

Trees that are stressed or damaged are the most susceptible to borer attack and dieback. Tunneling by this insect can also weaken or kill young trees, especially during prolonged dry periods.

The ash borer targets open-growing trees, so avoid planting ash in exposed locations. Young trees are susceptible to attack, so if you're living in a neighbourhood that already has many ash trees, it would be a good idea to select a different type of tree to plant.

Since the insect prefers to feed on trees that are drought stressed or mechanically injured, keep your ash tree protected, healthy and well watered. Ash borer eggs are almost always laid in or near wounds, so avoid pruning ash trees when the egg laying adults are present (June and July in our area).

Ash borers spend two years in the larval stage to complete development this far north. Pupation occurs in the spring of the third year and adults emerge shortly thereafter.

The moths have dark transparent wings, yellow stripes on the abdomen and about a 30 mm wingspan. Females live about one week, during which they lay eggs in bark crevices or tree wounds.

Once hatched, larva feed within the bark for the first summer. Larvae bore into the wood during the second year. Sawdust is visible outside the tree as larvae clear their tunnels of debris.

After spending the second winter in the heartwood, larvae tunnel close to the bark surface and pupate. The pupae push through the bark just before emergence. When the adults emerge, the distinctive pupal skin is left sticking out of the exit hole. 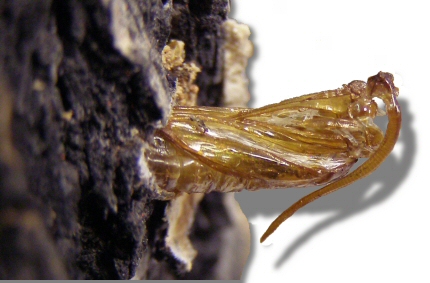 Just So You Know

The adult ash borer is a harmless moth that resembles a stinging wasp. Such mimicry is thought to offer the insect protection from predators.