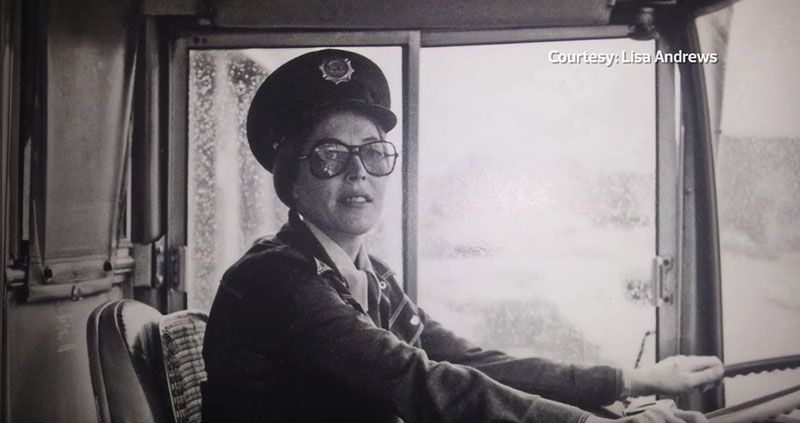 Kathleen Andrews behind the wheel of an ETS bus in an undated photo.

Male colleagues questioned her capability. They played pranks on her. Some went out of their way to make her work difficult. Some passengers refused to get on her bus. It was May 1975.

Andrews, a single mother of 2, persevered. She proved herself to others and was accepted by her peers. For 3 years she drove a bus for Edmonton Transit Service (ETS)—and then kept picking up firsts. The first woman dispatcher. The first woman in ETS management.

“She opened up a whole new world for women to work and get paid equally in non-traditional roles,” said Lisa Andrews of her mother, role model and hero, who died in 2013.

On Sunday, February 9, 2020, the first bus rolled out of the new, 400,000-square-foot-plus ETS garage at 12403 Fort Road in northeast Edmonton. The name of the building: the Kathleen Andrews Transit Garage.

“Not only has the building come to life, but the legacy, her accomplishments and sacrifices did too,” said Lisa Andrews, who worked as a transit operator herself and now serves as an ETS instructor.

“I hope she will inspire everyone who works at the Kathleen Andrews Garage.” 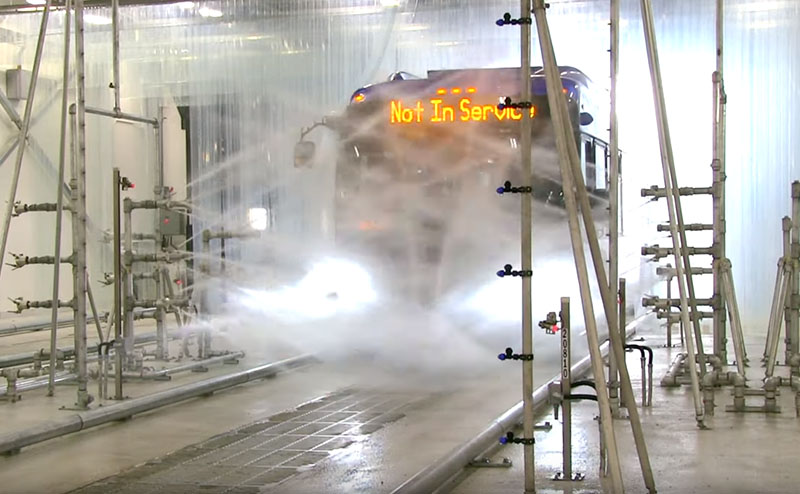 The Kathleen Andrews Transit Garage collects rainwater and uses it for washing buses.

The garage, a LEED Silver Certified building, is inspiring.

It replaces the Westwood Transit Garage, which served for almost 60 years, as the home for approximately 275 conventional buses. It will also house the infrastructure to support 30 of 40 electric buses soon to join the fleet.

The garage is a kind of vehicle itself, helping the City of Edmonton get to where it wants to be—a climate resilient organization that thinks about the environment from design through construction to operation and maintenance. In a growing city that provides public transit options to and from the important places in Edmontonians’ lives.

“This is more than just a new garage,” said Eddie Robar, Branch Manager of ETS. “This is a prime example of how we’re preparing to serve a city of two million people.”

The new garage is more efficient, innovative, sustainable and reliable. It is home to a host of environmental, artistic and community features, notably a roof that collects rainwater used to wash the buses. It cost $210.7 million, and debuted as one of North America’s leading transit facilities. 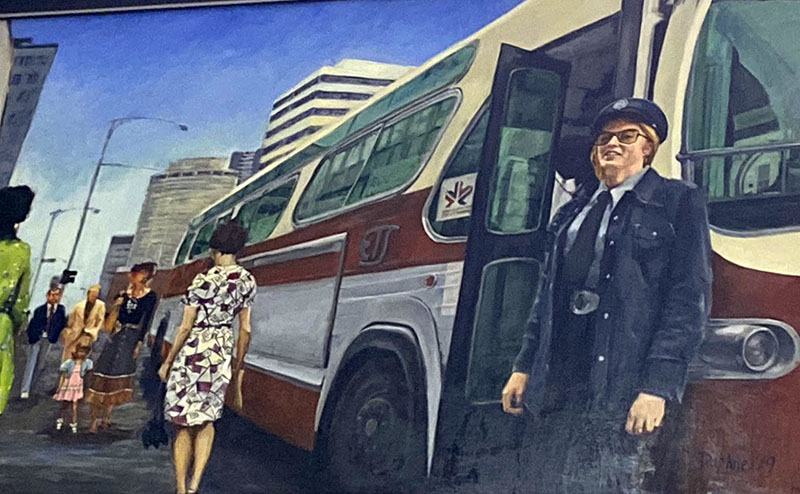 The portrait First Lady of Transit by Daphne Côté.

When Kathleen Andrews started with ETS, she earned $7.50 an hour, the same wage as her male colleagues.

On Sunday, February 9, when ETS and Fleet and Facilities employees came to work on inauguration day for the new garage, they walked through the front door and under a portrait of Andrews titled First Lady of Transit by Daphne Côté.

They walked into an ETS that is dedicated to diversity and that continues to use an equal pay structure for all employees and Gender-based Analysis Plus and other City programs to be mindful of women’s experiences in service delivery.

And at 5:10am they watched ETS operator Debbie Niebergal drive the first bus out of the Kathleen Andrews Garage, with Lisa Andrews on board.

Lisa Andrews said her mom would approve. “I think she would just be so honoured,” Andrews said. “If I know my mom, she would cry.”

Watch the story of the Kathleen Andrews Transit Garage.